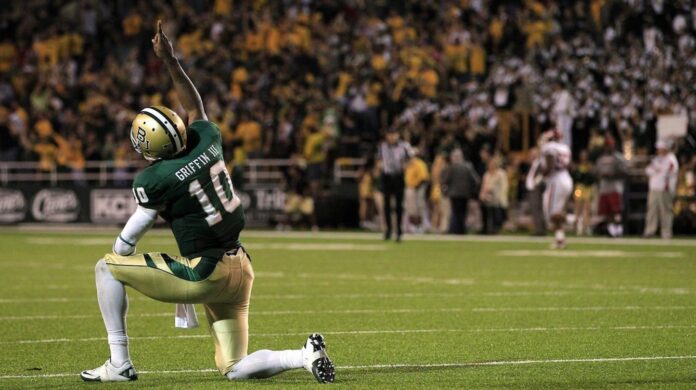 I am halfway through the manuscript of First Down Devotions Vol. 2 that I will submit to my publisher in about a month.

Last NFL season, I spent a lot of time at Cincinnati Bengals home games and talked to players who I thought would be a good fit for the book.

One of the players I met was nothing like I had imagined.

I don’t know why, but I was never a fan of Robert Griffin III, or RG3 as he is called.

Everyone has been taught not to judge, and I didn’t, but he was just not a player I followed. I thought he received too much press and never lived up to the hype.

But then I spoke with him. and my opinion changed.

I am now a fan of RG3. What he said to me was just as important as how he said it.

Injuries played havoc with the talented athlete and he never lived up to expectations. After four years with the Washington Redskins, he was let go and did not play with any team in the 2015 season.

He went to Cleveland for two seasons and was released in 2017. No team wanted him.

“I’ve faced some tough obstacles over the years,” RG3 said. “But through it all, my faith has been solid. I know His grace was there in my life during dark days.”

In early 2018, he signed a contract with Baltimore and was named a backup quarterback.

Although he was grateful for the opportunity, he was a little discouraged.

“When I came into this league the number two pick, I knew I could do some great things,” he said. “So, I had to ask myself, ‘why would I want to go somewhere and compete for a number three or four spot?’ I knew I could be a starter but at the same time I felt God telling me to go there.”

He likened his attitude with that of Jonah when the Lord told him to go to Nineveh.

Jonah wanted the city destroyed and balked from going. In his heart, Nineveh deserved God’s wrath and did not want to see mercy extended to the people.

He soon discovered that the Lord’s mercy and salvation is available to all who repent and not those who Jonah selected.

“I prayed and asked for guidance,” RG3 said. “I made the decision to go and earn my spot. Then I got resigned and continued to work my way back. I know that without God’s direction in my life and my faith, I would not be here today. This organization has been good to me.”

He adjusted his attitude and ego and went where he was told to go. I admire that about him. RG3 spoke to me in a professional and polite manner, and I gained a whole new respect for him after that interview.

“I know that without God’s direction in my life and my faith, I would not be here today.” RG3

You might be in a similar situation to the one RG3 faced. Granted, you probably won’t be called to work out with an NFL team for a position you don’t want, but you get the idea. He imagined himself as a starter, but he accepted the role of a backup. It wasn’t beneath him, but he knew he could still play. Here are some suggestions on how to be sure you move in the direction God leads you:

At first, RG3 questioned God’s direction in his heart. But he admitted that following the Lord’s leading and going to Baltimore was one of the best decisions he ever made. Follow God’s direction, and you can come off the bench to make the game-winning pass.

The Point of No Return

February 7, 2018
You are going to send email to
Move Comment