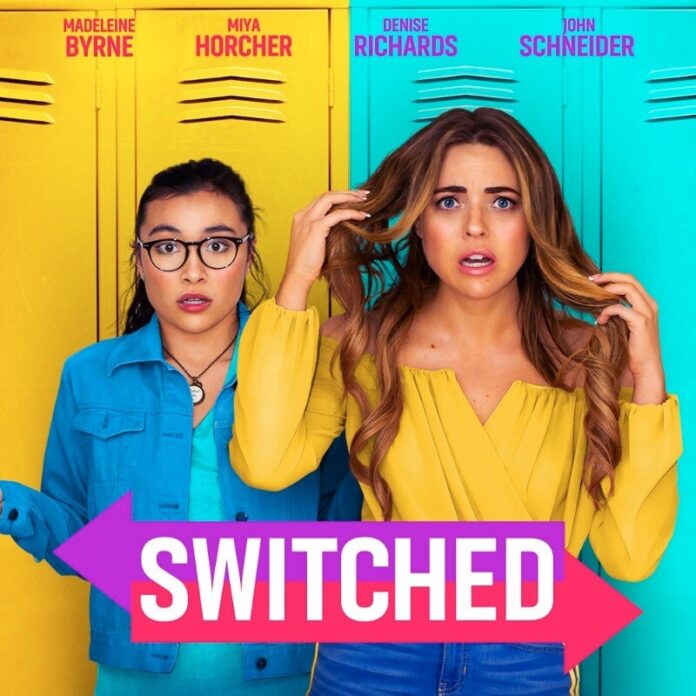 When you are a teenager, high school is #everything.

At least that’s what church girl Cassandra Evans believes. Although Cassandra is musically gifted, she is unpopular. But if she could be more like Katie Sharp, things would be different. Katie is a model with four million followers on social media and no consideration for others.

So, why does Cassandra want to be like Katie? After all, Katie and her band of mean girl followers make fun of other girls’ clothing, makeup, and friend choices. And worse, Cassandra is a target of Katie’s repetitive bullying.

After Katie and her friends pull a horrible prank on Cassandra and post it on social media, Cassandra decided to do something about it. Rather than retaliate, she prays that Katie would know what it’s like to walk a day in her shoes. To Cassandra’s (and Katie’s) surprise, God answers her prayer, and the next day, she and Katie switch bodies.

Think Freaky Friday meets Mean Girls, but with valuable examples of what it looks like to live out your faith in everyday life including using social media for the good.

Switched emphasizes a strong Christian worldview where the teen characters discuss biblical principles and repent of poor behavior without being preachy. The film is entertaining and heartfelt with good acting and relatable characters. I also happened to like the wardrobe which was cute and trendy while still being modest—a difficult feat in today’s culture!

A bonus that I appreciate is the useful resources for your group, study, and church available on the Switched website where viewers can also watch the trailer, meet the cast, see deleted scenes, and more.

Although ‘the old switcheroo’ has been done often in films, it works beautifully in Switched to demonstrate quite literally the biblical principle of loving your neighbor as yourself. If you have teenagers in your life, especially girls, I highly recommend this uplifting movie available on digital and Video on Demand.

SoCal Voice had the pleasure of interviewing Alexandra Boylan, an award-winning filmmaker, and the writer, and producer of Switched. Alexandra is also an actress who plays the science teacher in the film. She is the co-Founder of Mustard Seed Entertainment.

Alexandra’s sister, Andrea Polnszek, is a writing partner on the scripts and writer of all of the companion materials for the movies. She is a Licensed Clinical Social Worker who has spent years helping children and their families communicate with each other and grow in God’s love.

John KD Graham is a writing/ producing partner and the director of all of the Mustard Seed Entertainment films. He worked with CBS and on major blockbusters such as The Avengers and True Grit.

What inspired the movie Switched?

I was raised in a minister’s home. I lived in an affluent area although we weren’t wealthy. I had to go to the basement of the church and pick my clothes out of donations. At school, I was tormented. I thought if those kids knew what it was like to live a day in my life, would they have empathy?

What lessons do you hope viewers will learn from Switched?

If someone is bullying, it usually means they are broken in their heart or home life, or somewhere in their life. But if we can heal the heart of the bully, we can stop the chain reaction.

We also wanted to address cyberbullying. It can be easy to sit behind a computer screen and spout out mean things but you don’t see the person it’s hurting and the ripple effect it causes. We want (viewers) to see we can use social media for good and have a ripple effect of kindness.

One of our favorite lines from the film is, “Before you idolize or bully someone, imagine what it’s like to live a day in their life.”

Tell us about Mustard Seed Entertainment

I’m the co-founder along with my sister, Andrea Polnaszek, and John Graham. We want people to trust us and see we are producing films that are uplifting and honor the name of Jesus Christ. The goal of all our films is that everyone can enjoy it. We also want to help facilitate conversations for families.

We can either reflect a broken culture, or we can create a culture that shows how life could be better. We aren’t in the converting business. We’re in the business of portraying values God calls us to live out. Our goal is to spread the love of Jesus through entertainment.

Share about the resources for Switched and your other films.

We have a devotional, a Bible study called Lead with Love, a journal, and resources for youth groups, churches, and high schools.

When did you start acting and writing?

I started acting when I was a kid at school and church. My parents were super supportive of me from the beginning and now are stoked that I’m making faith-based films. At 14, I had my first professional audition in Boston.

At 19, my dad helped me moved to Los Angeles to pursue professional acting. I did that for 10 years before moving to Albuquerque, New Mexico in 2009. At that point, I started writing and producing my own stuff. That’s when I found all these incredible filmmakers and we teamed up and started making short films.

Our sales agent suggested that we make faith-based family movies and that’s when I knew God was calling me to do this. My biggest stepping out in faith came next. I put everything I owned in storage and moved in with my sister to write ‘Catching Faith’. I lived on the road for an entire year to write and make it. We had $75,000 to do the entire movie. I couldn’t even pay myself. And ‘Catching Faith’ went on to be the top five consistent selling movie for the distribution company. I still look at what God did with that movie and can’t believe it!

Do you have a life verse?

“For I know the plans I have for you,” declares the Lord, “plans to prosper you and not to harm you, plans to give you hope and a future.” Jeremiah 29:11

Where can people see Switched and find your other movies?

Switched is available on DVD and Amazon

For more information and resources go to

REVIEW: ‘Spider-Man: Into The Spider-Verse is a family-centric superhero flick

The Case for Christ

REVIEW: Kids will enjoy ‘Aladdin’ — no matter what critics say