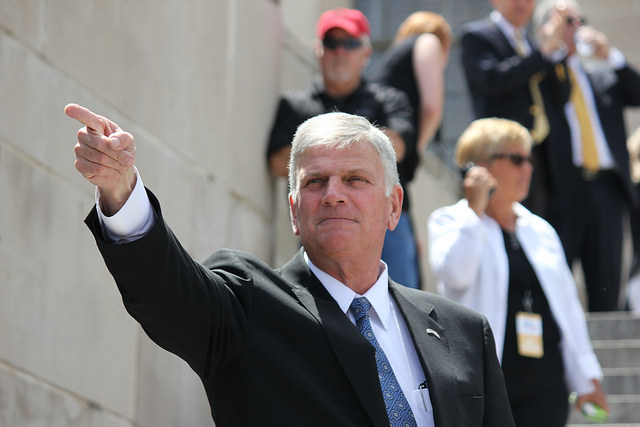 Evangelist Franklin Graham called on Christians to pray for peace as the US face turbulent times following the violent death of George Floyd in the hands of a police officer in Minneapolis late May, reports Canadian Christian radio station, CHVN Radio.

In a Facebook post, Graham urged people to go down on their knees and pray. He wrote: “As Christians, the greatest weapon and the most powerful defense we have is prayer. Our country needs prayer in a critical way.”

Ask God to change hearts and heal this divide in our nation. —Franklin Graham, Evangelist

People were outraged after learning that Floyd, a 46-year-old African-American, died in police custody. Many took to the streets to condemn racism in the country and police brutality Floyd endured. Demonstrations were happening in Los Angeles, Philadelphia, Atlanta and Seattle and the largest was in Houston, Texas, Floyd’s hometown. Many defied curfews to join rallies.

While most were peaceful protests, some became violent and with widespread looting of business establishments and arson, reports BBC. There have been police shootings, use of smoke grenades and tear gas to quell the unrest. Curfews were imposed in several cities across the country to curb the tension.

With the country in anarchy, the president and CEO of the Billy Graham Evangelistic Association (BGEA) asked Americans to pray, “We need to pray for PEACE, because ‘the anger of man does not produce the righteousness of God’ (James 1:20). Pray for PERSPECTIVE, because ‘the wisdom from above is first pure, then peaceable, gentle, open to reason, full of mercy and good fruits, impartial and sincere’ (James 3:17). Pray for PATIENCE, because of God’s ‘kindness and forbearance and patience’ toward us all (Romans 2:4).”

Graham believes that prayer is a big step for Americans and the country to heal. “Ask God to change hearts and heal this divide in our nation.”

Prayer is exactly what this nation needs !﻿🙌﻿﻿🙏﻿

Survey Reveals Majority of Americans Agree that Abortion is a Sin

“Unplanned” in Theaters March 29: Q&A with the Producers

Biking from Texas to Alaska to Fight Cancer

October 11, 2018
You are going to send email to
Move Comment