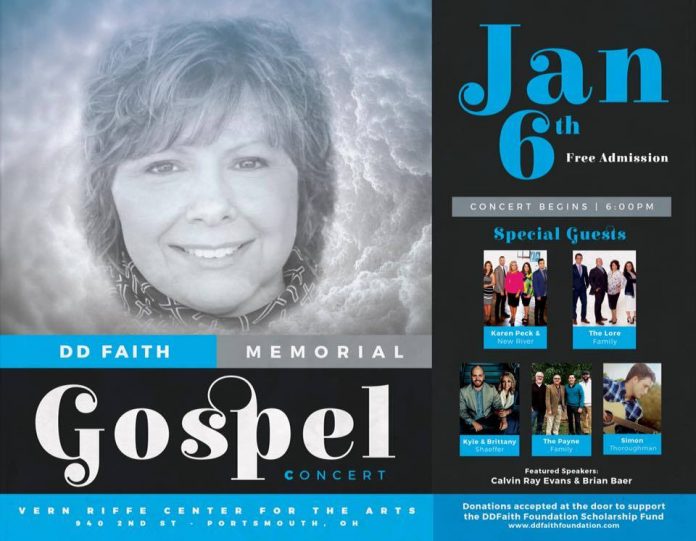 The DDFaith Memorial Gospel Concert is not just a show. While I love to hear Karen Peck and New River sing, and I’m excited for them to perform in our small town, this event is much more than the music.

You can catch it on Saturday, January 6, at 6 p.m. The venue is the Vern Riffe Center for the Arts on the campus of Shawnee State University in Portsmouth, OH. The Lore Family, Kyle and Brittany Shaeffer, The Payne Family and Simon Thoroughman are also on the docket. Calvin Ray Evans and Brian Baer are the featured speakers. There is no admission price, but donations will be accepted at the door in support of the DDFaith Foundation Scholarship.

The title is fitting – the “DDFaith Memorial.” You may wonder what that even means. But many of us are still very much aware, and when we stop to think about it, the memories flood back into our minds of her smile, her determination, her shout, and her belief in a loving and merciful God.

I had a front row seat for all of it. My brother-in-law was a single father with two young daughters when he brought Dee Dee into our lives. She had long curly black hair and a smile with braces, and I thought she looked like a teenager. Appropriately, I first met her at church. Blaine was a sheriff’s deputy working on drug-related cases, and she was a pharmacist at Kroger when they met. He later proposed to her on a prescription pad he slid under the counter window.

Dee Dee wasn’t the only one who believed God would heal her while she was on earth. She helped us believe too.

Their marriage plans were interrupted by the sudden illness and death of my father-in-law. But two months later, she became part of our family and was thrust into instant stepmother status. Our nieces Ashley and Brittany lived most of the time with her and Blaine, and they quickly found out she was a calm but stern and powerful influence in their lives.

A year after her marriage, she gave birth to a baby girl named Grace. This beautiful child inherited the dark hair and beautiful eyes of her mother and brought much laughter and joy into our family.

Dee Dee certainly had her idiosyncrasies. The main one was her constant tardiness. A good schedule never got in her way. We would start our family Christmas party, but she was still at the malls and eventually found her way there about the time everyone else was leaving. She lived on her own time clock, and we just got used to it. There was no use to get mad. We found it humorous after a while.

The years went by, and life was seemingly normal. Then Dee Dee was diagnosed with ovarian cancer.

The first time, she went through some rigorous chemo and lost her hair. I remember her words – she was willing to go through anything if it led her loved ones to accept Christ. She would do whatever it took. Fortunately, she recovered, and her hair grew back. She started “Team Grace” and got involved with the annual Relay for Life held by the American Cancer Society. She went back to work, and life continued until cancer returned a second time.

This bout was worse. Her rigorous treatments made her sicker than ever, and her hair fell out again. She could not stand the awful taste in her mouth. When she finished the course, a PET scan revealed her to be in total remission. She excitedly called me at work that day to tell me, and I couldn’t wait for her to share her miracle. That evening, she stood in front of our church congregation, held up her hands to heaven and announced the news to a standing ovation. She even had a special shirt made for the occasion, and we celebrated her healing at my son’s birthday party later that month. A cake bore the words, “I Am Healed!” And her life returned to normal once again.

A year later, a knot appeared on her neck. At first, only she and Blaine knew about it. There would be no more chemo. She just couldn’t do it, and now she placed her future in God’s hands and drew closer to Him than ever before. Her faith was strong and bold. Nearly 18 months passed by, and then one day in March 2014, my office phone rang again. This time, the news was bleak. She explained how she had worn scarves for the past few months to hide the growing tumor on her neck, and the time had come to let her church family know so they could start praying for God to heal her. She planned to tell them herself that night at prayer meeting, but she never made it.

She was so sick she sent Blaine to share the news. He promptly left afterward to take her to the hospital. She had blood clots in her lungs, and the final journey had begun. Many from our church met at her home and surrounded it in prayer. We walked around the property seven times, God’s perfect number.

My son, Gabe, who was crazy about his aunt and her love for Christ, longed to do something to pay tribute to her overwhelming and unshakeable belief in God. His response was to order a vanity license plate for his truck that read “DDFaith.” I posted a photo of it on my social media, others began to share it, and the movement began with the slogan, “I Believe in Miracles.” Hundreds of shirts were sold, and pink signs with the saying and “DDFaith” were posted in yards all over the region and even in other parts of the state. Many people shared their support on social media with the hashtag #DDFaith. Grace’s school even hosted a special night at a home football game to raise money in support of the family. 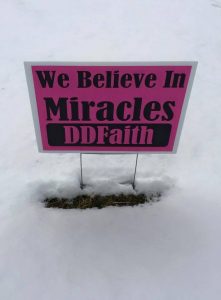 Dee Dee was in and out of the hospital for several months. By fall, she was living in a hospital bed in the living room of her home. Ashley stayed with her during the day, and her mother Carol, a retired nurse, spent the nights. Her friend Kelly, daughter Ashley and I started a DDFaith Facebook page to keep her friends updated and to provide a way for those in the community to encourage her during the battle. Within 48 hours, the page garnered approximately 1,000 likes and reached more than 7,300 people. So many of her friends sent her inspirational messages of hope over the next several weeks.

My husband and I last visited her on New Year’s Eve. She sat up in bed and spoke with passion about Brittany’s upcoming wedding and all the plans to be made. She and Blaine were building on to their house, and she was excited about her new craft room. By now, the tumor was so big it could no longer be hidden. But the doctors wouldn’t touch it.

Three weeks later, she lapsed into unconsciousness, and we never spoke with her again. The family kept vigil around the clock for the next week. The day after she was admitted, her father went home with a broken heart, sat down in his recliner and passed away. She would hang on for another few days, but then we all gathered around her bedside as her breath grew shallow, and we watched her slip away into eternity to receive God’s ultimate healing.

Dee Dee wasn’t the only one who believed God would heal her while she was on earth. She helped us believe too. We sat in utter shock that day with many questions for God about how He could allow this to happen. I have shared only a brief portion of the details, but my husband has spent the last year trying to pen the story of DDFaith into words, how it began and how it still touches our lives today. We hope to publish her full account over the next few months.

We will never get over it completely. She changed our lives forever. While we may have moved on, we still think of her often, and we see her every day through Grace’s smile and laughter. This annual concert event helps us to remember Dee Dee’s grit and determination and her strong faith in God. Sure, it helps to raise scholarship money for high school seniors who have a testimony and inspire others, and that’s a wonderful thing. But it also helps to remind us of her and how we will truly never be the same.

Editor’s note: If you would like to donate to the DDFaith Foundation (a 501c3 Organization), please send a check to:

NBC’s new streaming service Peacock is worth watching — and it’s...

December 23, 2018
You are going to send email to
Move Comment