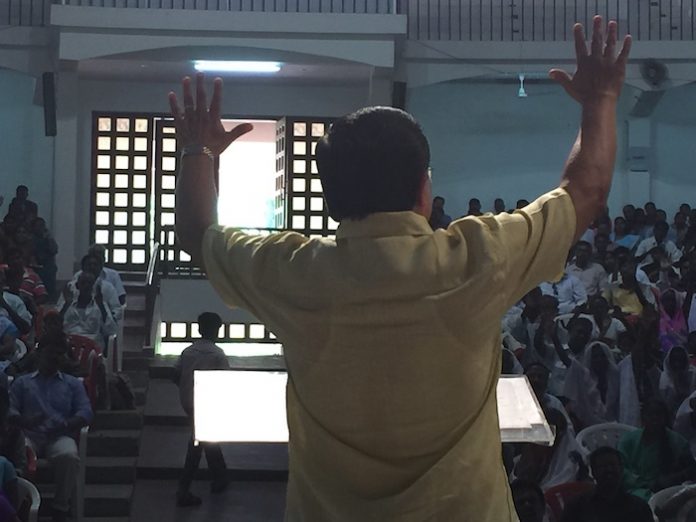 “My great grandfather was the first one of my family to become a Christian from the Hindu religion.”

The presence of India in noticeable in Northeast Ohio. The US headquarters of the India Gospel League (IGL) is located southeast of Cleveland in Boston Heights. The vision of IGL is from Proverbs 29:18, which says, “Where there is no vision, the people perish.” This vision is inscribed on the wall of the fellowship center at IGL’s main campus outside Salem, India in Tamil Nadu. From Northeast Ohio, this vision is spread throughout our country as though etched in the hearts of those who serve.

India lies smack in the center of what is called the 10/40 window, an area based on ten and forty degrees latitude of the equator. Ninety-seven percent of the populations of the fifty-five least evangelized countries live within this window, and India is vastly unreached. To that end, Samuel Stephens, president of IGL and indigenous India pastor, reached out to Christian leaders in the US and eventually settled on this area of Ohio from which to gain support for the ministry.

ministry. Led by Prati Stephens (Samuel’s wife), Women With a Mission (WWM) serves to empower women to change their communities with the gospel. It’s easy to say, “Yes, I will accept Jesus” and then “add” Him to their inventory of gods (India claims to have 300 million gods). WWM accepts their declarations, but it’s only after two years of Bible studies, commitment to evangelizing, and a strong witness for Christ that one can be baptized.

Emotions run high when groups gather for a time of teaching and worship. These people who have been under the tyranny of darkness now see the light of Christ, and joyfully celebrate their newfound freedom as Christians. Becoming a Christian is hard enough in India; becoming a Christian Pastor is a hard-fought calling. But when called, they respond with vigor, some having given their lives to share the gospel.

In Boston Heights, this is not lost on the staff of twelve as they run the day-to-day business of IGL. The Stephens family often visits from India (Samuel, Prati, and Rebecca Stanley, their daughter) to meet with the board, offer encouragement, and visit various churches in the US to give first-hand reports and garner new supporters. From time to time, one of Samuel’s pastors from India visits and speaks to various supporting churches.

India Gospel League has planted over 90,000 village churches in the past 25 years! Most of these start as house churches, and some of them remain that way, but supporters from around the world regularly donate money toward the building of Life Centers. From inside these houses of worship, the joyful singing and preaching can be heard in the villages, bringing light and life.

What do they need? Much prayer as the atmosphere for Christians grows harder. But as one of the IGL pastors says,

“We welcome persecution, because in it, the church grows.”

The Difficulty of Finding Love

Where is the Hope for a Messed up Life and World?

Forgiving Others: Difficulties and Benefits

March 5, 2018
You are going to send email to
Move Comment