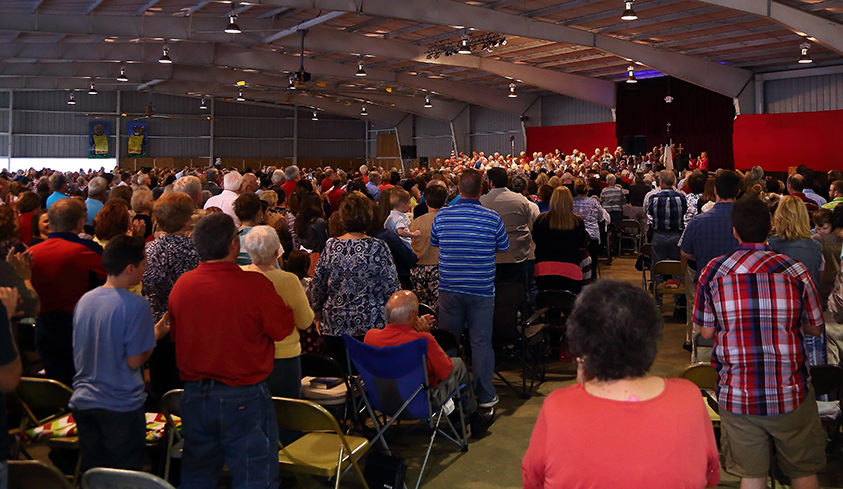 Set your calendars now for one of the biggest church events in southern Ohio. The Spring Jubilee camp meeting will be held at the Scioto County Fairgrounds in Lucasville, Ohio, from May 15-19, 2017.  This annual gathering is celebrating 21 years and has seen more than 400 souls saved.

Last year, 32 churches from Scioto County and southern Pike County came together to support this gathering, and more than 150 different churches were represented.  The average nightly attendance in 2016 was nearly 1,600.

It is presented by Evangelistic Outreach Ministries (www.calvinevans.org ) of New Boston. Calvin Ray Evans and Brian Baer, also the pastor and assistant pastor at Rubyville Community Church, are the main evangelists this year with a special visit on Friday night by CT Townsend.  Originally from Charleston, West Virginia, CT and his family now live in Andersonville, S.C.  He preached in the 2016 Burlington revival in North Carolina —a revival that began on Mother’s Day and ran for 12 consecutive weeks!  (Note: This tent revival is kicking off again today.  For more information, go to https://www.facebook.com/burlingtonrevival).

This year’s lineup is:

The camp meeting began back in 1996 when Bob Alexander, pastor at Miller’s Run Church in Lucasville, approached Calvin Ray with the idea.  At the time, he and his father, the late Calvin Evans, held an annual fall revival in the hills of Pedro, Ohio, just north of Ironton, and Bob wanted to have one in Scioto County as well.

“I told him to pray about it, and if he could get eight churches in the area to pray for it and support it, we would do it,” said Calvin Ray.  Bob partnered with Ed Cox, pastor of Minford Community Church, and in less than a week, they gathered endorsements from a dozen local churches.  Soon, Spring Jubilee was born. The first few years, attendees met in the 4-H building at the Scioto County Fairgrounds.  It was the biggest building located on the grounds at that time, and it was filled with people the first night.  A few years later, the fairgrounds built the Pavilion, and services were moved there which increased capacity by several hundred more people. Last year, 32 churches from Scioto County and southern Pike County came together to support this gathering, and more than 150 different churches were represented.  The average nightly attendance in 2016 was nearly 1,600.

“The impact is great to our region,” said Evans.  “The vast majority of those who are converted go into the churches that attend and support the meeting.  So our local churches have gained some wonderful folks in their church families as a result.”  He adds that it is the largest attended week-long service in the area for a religious meeting of this nature and has been for many years now.

The record crowd for one night’s attendance is 2500.  This happened a few years ago on the night the McKameys first debuted along with the Cruse Boys.  The McKameys are now on the schedule every year.

In the event’s early stages, Calvin Ray and his father usually did the preaching along with a few other guest preachers such as Billy Fields and Jack Lassiter.  The late Harold Patrick played piano for the first several years as well.  “God has given us great ministers over the years and wonderful talent,” said Calvin Ray.  More recently, Mike Blanton and Jacob Berry of Miami, Oklahoma, have preached as well. (Sidebar: Jacob just got engaged to be married. See more about him at www.jacobberryministries.org.) In addition, the Spring Jubilee choir sings each night under the direction of Mark Baer of Beech Fork Church.  All attendees are welcome to sing in the choir which practices in the building next door to the Pavilion at 6:30 p.m. each evening.  Mark has been the choir director since the beginning.

“The cooperation of the churches and the unity have built bonds of friendship and relationships for church leaders to work together,” said Calvin Ray.  “Several have accepted the call to preach during Jubilee as well.”

Services are held each evening at 7 p.m., and admission is free.  If you would like to bring a camper and stay for the week, full RV hookups are available as well, and prayer meetings are held each day at 10:30 a.m.  For more information, call (800) 767-8713 or visit online at www.calvinevans.org.

Note:  Please stop by and visit One Christian Voice’s table each night in the building adjacent to the Pavilion.

What a ‘Night to Shine’

October 17, 2018
You are going to send email to
Move Comment