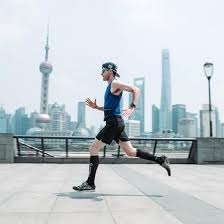 My wife and I took a cruise to Alaska to commemorate 30 years of marriage. Others do outlandish things while some prefer to keep things quiet and allow self-gratification to be their reward.

But Greg Nance has a massive plan to recognize his 3,000 days of being sober – that’s more than eight years.

On March 16 of this year, Greg hit this milestone, and he has a big bash planned. But due to the coronavirus, it won’t be until next year. And that’s okay because it gives him more time to plan.

But the cool part about this is that you can help celebrate, if you happen to see him whiz by.

Greg says that next year, he will be the first person to run from New York City to Seattle.

No Ubers. No cabs. No hitchhiking.

Only a few pairs of running shoes are all he needs.

He is making the jaunt from the Big Apple to the Emerald City to bring awareness to the epidemic of drug and alcohol addiction. And along the way, he will see the wonderful sites of America.

“I can’t think of a better way to celebrate my sobriety and bring awareness at the same time,” he said. “I’ve jogged in 49 countries and run some of the toughest foot races on the planet. I’ve set 10 fastest known time running records and completed seven marathons in seven days on seven continents. But this will be my biggest challenge.”

Greg told me that when he was 16, he turned to alcohol to drown his sorrows after his grandfather, Charlie, suffered a debilitating stroke.

“He was my hero,” he said. “I watched him fade away and was powerless. I couldn’t do anything.”

Greg also had a bad case of tendinitis in his arm, and that put his dreams of playing baseball in jeopardy.

Soon he was introduced to opioids to help with physical pain and became addicted. And the alcohol masked the grief he felt for his grandfather.

“I needed it to feel okay, and to not feel the pain.” Greg Nance

His drinking habit escalated from casual drinks on the weekends with friends to drinking alcohol before school at 7 a.m.

He was in denial about his abuse and depressed about life.

Running was his way to escape – it was his salvation.

Compassionate mentors and a daily training regimen saved him and gave him a reason to get up every day.

He soon realized he was not the only person who suffered from addiction and depression.

There are more than 40 million Americans who are hooked. That’s one in seven adults. And for 3,000 days and counting, he’s been clean.

“As I run across America, I want to hear and share some of those stories,” he said. “I want them to tell me about their struggles because I was there.”

And that’s not all.

He is partnering with documentary director Sarah Schutzki who will chronicle the journey.

“The run by itself will be amazing, but having her along to weave my personal story with addiction and recovery, and to weave it along with stories from others who have struggled with this disease, will hopefully inspire and educate people,” he said.

Greg’s journey’s is incredible and inspirational.

I have never been addicted to anything, but I have suffered from depression, and It’s serious.

Anxiety and discouragement are often misunderstood by the church:

I hope to cross paths with Greg next year, when he dashes through Ohio. Maybe that will happen.

He found his stride through running and is now making an impact, and his message is loud and clear.

For more information on his trek across America, visit Greg’s website here.

October 15, 2018
You are going to send email to
Move Comment